Back in 2012, while working for Cornell Cooperative Extension, I was facing a conundrum. Much of the east coast had experienced widespread floodwaters in 2011, after Hurricane Irene and Tropical Storm Lee. These storms greatly affected valley farmlands with major flooding. These wet conditions spread a nasty, tenacious soil-borne fungal pathogen that produces a crop disease called Phytophthora blight.

Crops like this butternut squash can be infected with Phytophthora blight if there are wet growing conditions. This happened in New York state in 2011 after an active hurricane and tropical storm season. Researchers studied a technique called biofumigation to rid the soil of the fungal spores. Shown here, a healthy butternut squash cash crop sitting atop a rolled rye mulch in the year after biofumigation. Credit: Justin O’Dea.

Many vegetable growers in my county of New York State showed me thousands of dollars-worth of pumpkins, squash and peppers rotting from this blight. It’s an Extension agent’s job to help growers determine ways to solve problems in the field. But as an agronomy specialist, in this case, I needed the expertise of a crop pathologist. I turned to vegetable pathologist Meg McGrath, at Cornell University’s station in Long Island.

Meg told me about an experimental treatment to help control Phytophthora blight using certain plants in the Brassicaceae family as cover crops. Plants in this family are mustards, cabbages, and broccoli, etc. They are healthy for humans for many reasons – and it turns out they may have the ability to benefit soil health also.

Brassicaceae family plants build specific sulfur compounds in them, which makes for their unique smell. These “gluconsinolates” are contained in the plant cells. They are also responsible for what makes certain brassicas spicy, like mustard, arugula, and horseradish. Meg’s study was looking at how plants like mustard, and their unique chemicals, could be used as a natural fungicide.

A Brassica juncea cover crop being managed to facilitate biofumigation. Cover crops are 1) flail chopped to release sulfur-containing compounds from plant cells, 2) incorporated into soils, and surface-packed to encourage retention of fumigating gases, and then 3) irrigated to assure that water is available for necessary chemical reactions to take place and to further seal the soil surface for gas retention. Credit: Justin O’Dea.

Using Brassicaceae plants’ glucosinolates for their ability to work as a natural fungicide is called “biofumigation”. On the surface, the process seems straightforward:

There is a lot of chemistry involved in what is going on in the soil after step 3. Let’s simplify it to say that the moisture of the soil starts a series of reactions that make the glucosinolate compounds break down into natural fungicide gases. The Brassicaceae plants, soil, and water contain all the possible parts of the equation to make this work. But the grower has to know what goes into growing a good biofumigation cover crop. Then they have to get all the pieces in place to get the fungicide to form to fight against their Phytophthora infestation.

Not all Brassicaceae plants contain the same types or quantities of gluconsinolates. Soil texture, organic matter content, warmth, and moisture content, can also vary and affect the biofumigation process. Lab studies have clearly demonstrated that biofumigation can effectively suppress many soil-borne pathogens and weeds. However, field studies have had a much wider array of results. So, while biofumigation might seem like a simple concept, in practice, getting things “just so” can be hard. We wanted to see just how hard this might be for our growers to actually do on their farms. We also studied if there were additional benefits we could measure from growers that adopted Brassicaceae cover crops. By 2014 we had a study in place.

Like past field studies, our studies didn’t find conclusive evidence about whether our farmers were able to suppress Phytophthora blight with biofumigation. In our case, we didn’t get enough blight throughout our study to make the assessment either way! But, our study did show there may be other potential benefits to Brassicacae cover crops that can make their use worthwhile beyond biofumigation.

One benefit is that Brassica cover crops often have aggressive, fast-growing taproots. These roots catch soluble nutrients that are applied to the cover crop. And, their long taproots help to move some of these nutrients further down into the soil.

Our Brassicaceae cover crops also returned generous amounts of nitrogen back to the soil. Growers in our study found that these cover crops always returned more nitrogen to the soil surface than what was applied to help grow the cover crop. This allowed them an opportunity to reduce their nitrogen additions to the next crop.

Increasing soil organic matter is another general benefit of returning the carbon contained within cover crops to soils. These Brassicaceae species are no exception. When growers added Brassicaceae cover crop into their rotation, the plants returned about 3.5 times more carbon to their soils than usual. Our study found a positive relationship between increasing organic matter and infiltration rates. This means that rain or irrigation water can enter the soil surface faster. This is important for Phytophthora blight management because the pathogen is spread in water, and thrives in wet years. 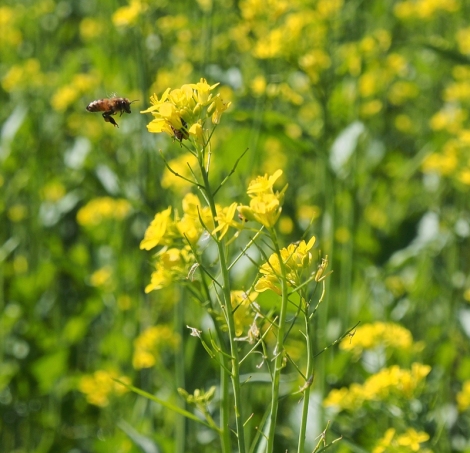 Although our two-year study didn’t generate definitive conclusions about Brassica cover crops and Phytophthora blight, it still generated a lot of useful information. For instance, we know that we could use a longer-term study for assessing biofumigation. Even though we weren’t able to see any Phytophthora blight suppression in our study, we know that the Phytophthora pathogen was in the soil because of recent infections. We also know that it easily lives for ten or more years in soils. That means at least some degree of fumigation should have occurred. So there is potential that we simply have yet to see disease suppression benefits from biofumigation in our farmers’ fields. We also now know what aspects farmers struggled with in adopting biofumigation practices. We learned about their perspectives regarding the benefits we measured. And, we learned what may have affected biofumigation potential for them in a given year. In the meantime, we know we made steps toward improving soil health – in cover crop nitrogen and carbon returned to soils. That means we know that the potential benefits don’t end with the biofumigation service that these crops can provide.

One response to “What is biofumigation and the connection to soil health?”