Question: When there is a produce recall, e.g., because of Salmonella on cucumbers or E. coli on tomatoes, do these pathogens come from soil?

This is an extremely difficult question to answer, as each food contamination event is unique. According to the Centers for Disease Control and Prevention (CDC) most food contamination events (91%) are traceable to the pathogens Norovirus, Salmonella (non-typhoidal), Clostridium perfringens, Campylobacter spp., and Staphylococcus aureus. 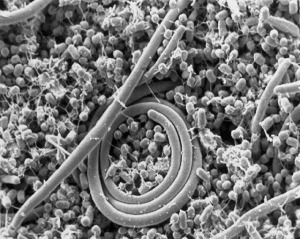 A scanning electron microscope image of Salmonella enteritidis, a gram-negative, rod-shaped bacterium that can cause diarrheal illness in humans. Photo: Jean Guard-Petter. USDA

The CDC estimates that microorganisms sicken some 48 million people each year, with the majority of the infections considered “an annoyance” not requiring treatment. However, each year some 128,000 people are hospitalized and 3,000 die from foodborne diseases—i.e., the threat is real.

What is the source of the pathogens and how do the disease events arise?

In the field, waste from wild or domestic animals may contain infectious agents, while human feces as a source of infection is more likely during food preparation. It’s also possible for human waste containing infectious agents to contaminate raw food when untreated human waste is used as fertilizer. (Yes, this happens in some locations.)

What about the soil?

Soil is largely devoid of nutrients at the levels needed by pathogenic microorganisms, and the physical conditions (temperature, moisture, sunlight) for their growth are not ideal. As a result, soil is not a great locality for these pathogens to live and they tend to die off over time. They have evolved to exploit the rich environments of the human and/or animal gut, not the hot and dry soil surface. Sunlight is also fatal to these bacteria.

As a result, typical soil is not a likely source of food contamination, unless the soil was improperly treated (close to harvest) with infected waste materials. The proper use of biosolids on soil should follow guidelines that lessen the risk of any potential pathogens encountering a food material.

However, these are open systems and animal sources of pathogens can make their way into production areas, bringing the potential for contamination. All this said, most food contamination events can be traced to improper handling and storage of prepared items long after they leave the farm.